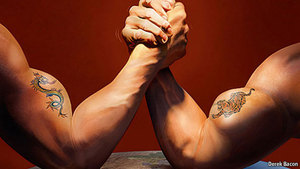 THE CONTEST OF THE CENTURY!!!!

We are back! Yes! Finally the contest is starting again. The guidelines are:

1) NO REMIXES. You must make every single part of the song in soundation. Vocals are allowed but only if you record them your self. No remixes no remakes and if i catch you using a midi file or sng file, you WILL be disqualified immediately.

2) You can post up to 5 songs, and i encourage you to do it! This is going to be a large contest!

3) DO NOT ADVERTISE. No advertising. Do not say you have posted your song or put a link in the comments. If you want to advertise use messaging.

4) NO SONGS YOU HAVE ALREADY MADE. All of the songs you post must have been made after September 30th, 2014.

Now. To go over time.

This is how the winner will be chosen. I will browse through each and every song. The ones i like will be given THE NOD. The Nod is just my way of giving kudos. So…… I cant participate….awwwwww…..BECAUSE I AM THE PRIZE! More on that later, after you get The Nod, you are NOT to tell another soul…….except one. And you must tell only one. You are not to tell others who you told about The Nod. Once you have told me who you have told, message me immediately. Then, i will choose 4 out of everyone. The ones with the most Nods and the most times they were told about others Nods. Those four will then go for a week and have all their songs voted on. The on with the most overall votes wins!
_________________________________________

PRIZES- 1st- Me. You get to do an epic rap battle of history with me, but the thing is it wont be a rap battle. But a soundation battle. We will collab on the intro, each say our names, then we will duke it out like Epic Rap Battles of History.

2nd- The full sng. that no one else will get for a remix opportunity on a song coming up.

THE SECOND SEASON OF THE CONTEST OF THE CENTURY!!!!

I know one of my tracks is going to lose. I bet you can't guess which one.

my profile picture is amazing

Hope Everyone Does good! I picked 3 of my songs i did well on!

If you love Deep House / Tech House you've got to check this! https://soundcloud.com/edu_95/deepdance001 || https://www.youtube.com/watch?v=AU32sVWONIk

uh no. I made them up i get to decide